2014 LA Times Festival of Books – Our YA Non-Fiction Panel!

2014 LA Times Festival of Books – Our YA Non-Fiction Panel! 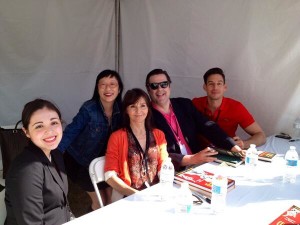 Let me start off by saying how much I LOVE the Los Angeles Times’ annual Festival of Books. I have been attending this book festival every April since it started in 1996! I’ve attended the festival as a book lover, as a panelist, and now as a moderator!

(Keep reading after the break for some fun details and behind-the-scenes photos of our panel and book festivities!)

For today’s panel, we discussed the genre of Young Adult Non-Fiction. I introduced the panelists, their bios and books. Here’s taste of our panel!

AARON HARTZLER: “Rapture Practice – My One-Way Ticket to Salvation, A True Story” (Little, Brown 2013) Rapture Practice is a memoir about Aaron’s life growing up in an fundamentalist Christian home and getting kicked out of his Baptist high school two weeks before graduation as he questions his faith, his sexuality, and what “being saved” truly means. Aaron grew up in Kansas City, mainly on the Missouri side. He is a writer and an actor who splits his time between Los Angeles and Palm Springs, where he lives with his boyfriend Nathan and their two dogs Charlie and Brahms. I met Aaron when he was working at the Society of Children’s Book Writers & Illustrators, so he is both a passionate fan and an expert on children’s literature as well. For more info, go here: http://www.aaronhartzler.com

JAMES L. SWANSON: “The President Has Been Shot!: The Assassination of John F. Kennedy” (Scholastic Press 2013) James’ latest book, “The President Has Been Shot! The Assassination of John F. Kennedy” is “… an action-packed, minute-by-minute ticking clock narrative that weaves together the riveting stories of an assassin and a president as he re-creates the November 21 to 25, 1963 timeline of John F. Kennedy’s assassination and how this event would change our country forever.” According to his official bio, James is “the author of the New York Times bestseller “Manhunt: The 12-Day Chase for Lincoln’s Killer,” upon which his award-winning young adult book, “Chasing Lincoln’s Killer” is based. Manhunt received an Edgar Award for the best nonfiction crime book of the year. James serves on the advisory council of the Ford’s Theatre Society. He has degrees in history and in law from the University of Chicago and UCLA and has held a number of government and think-tank posts in Washington, D.C. including at the United States Department of Justice.” Which means he is really super scary smart! 🙂 For more info, follow James on Twitter here: https://twitter.com/JamesLSwanson

GEORGIA BRAGG: “How They Choked: Failures, Flops, and Flaws of the Awfully Famous” (Walker Books for Young Readers 2014), illustrated by Kevin O’Malley Georgia’s book, “How They Choked: Failures, Flops and Flaws of the Awfully Famous” is the historically hilarious follow-up to her first book from that series called “How They Croaked: The Awful Ends of the Awfully Famous.” In her new book, “How They Choked,” Georgia examines “… how epic failures led to super successes. From Montezuma II’s mistaking an enemy conqueror for a god to Amelia Earhart’s “winging it” until she crashed, “How They Choked” knocks fourteen famous achievers off their pedestals to reveal the human side of history.” Georgia comes from a family of artists. She was a printmaker, a painter, and a storyboard artist before becoming a writer. She is also the author of MATISSE ON THE LOOSE, a middle grade novel. Georgia lives in Los Angeles with her husband, two children, and two cats. Since I have three cats, I really wanted to talk about her cats but I decided it was more important to talk about her books. 🙂 Her website is here: http://georgiabragg.com

MAYA VAN WAGENEN: “Popular: Vintage Wisdom for a Modern Geek” (Dutton 2014) According to the book flap of her memoir POPULAR, “Maya is stuck near the bottom of the social ladder. She has never been popular. But before starting the 8th grade, she conducts a unique social experiment – spend the school year following a 1950s popularity guide written by former teen model Betty Cornell. The real-life results are hilarious, painful, and filled with unexpected surprises. Her book offers a contemporary example of kindness and self-confidence, along with a better understanding of what it means to be popular.” As for her bio, Maya is 15 years old. End of story, she’s a genius, that’s all you need to know about her. ☺ According to her official bio: “When she was eleven, her family moved to Brownsville, Texas, the setting of her book POPULAR. Maya enjoys reading, British television, and chocolate. She now lives with her parents and two siblings in rural Georgia. She is a sophomore in high school but still shares a room with her sixth grade brother. They have not killed each other yet.” You can follow Maya on Twitter here: https://twitter.com/mayavanwagenen

I asked the authors questions not only about their books but also about the general topic of YA non-fiction. We even briefly discussed the requirements of the new Common Core system being implemented in public schools across the country in which high school students will read MORE non-fiction in their classes to prepare for college. Everyone’s answers were really insightful. There was a lot of laughter on the panel as well.

For James L. Swanson, he said he did not shy away from the often graphic violence of John F. Kennedy’s assassination – he knew teen readers could handle the truth of one of our nation’s greatest tragedies.

Meanwhile, Georgia Bragg could not handle the gory visual details of some the failures and deaths of the historical figures she researched, which was why she liked having Kevin O’Malley’s fun illustrations enhance the text of her book instead of actual photographs. Both Georgia and James said they were personally invested and also obsessed with their non-fiction topics, which is why they pursued these books.

Maya and Aaron wrote memoirs about their teen/tween years, which included being painfully honest in their observations about the real-life people in their lives. Maya said she originally wrote a journal to chronicle her popularity “experiment,” and said she grew as a writer from the first journal draft through all the revisions until the final draft. She joked about how someone from her old middle school tweeted about her book (that comes out later this year) and how the tweet wondered if the students should have been nicer to her! Aaron discussed the delicate balancing act of writing from a raw and honest perspective about his family whom he loves very much. His best advice to aspiring writers was simply to WRITE ALL THE TIME.

It was a pleasure to meet everyone at today’s panel. I have read all their books and HIGHLY recommend these books for book lovers, teachers, and high school students. One of my three cats, Beethoven, is a huge fan of their books! 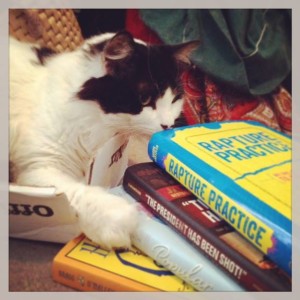 Beethoven helps me read all the fun books in preparation for the LA Times Festival of Books panel on YA non-fiction!

Now here are some silly fun behind-the-scenes pics at the book festival… It was a lovely, sunny Saturday when I arrived at the beautiful campus of the University of Southern California in Los Angeles, where the book festival is being held… 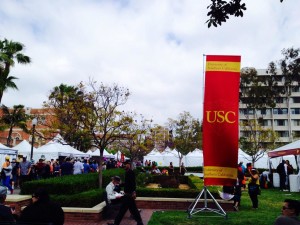 Welcome to the beautiful USC Campus and the LA Times Festival of Books!

There were hundreds of bookstore booths, food stands, and even music! Fun for the whole family! 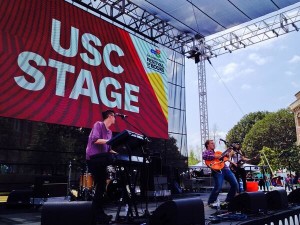 The LA Times Festival of Books is about books, food, fun and music! 🙂

The book festival can be a bit overwhelming, so I entered this lovely “Little Chapel of Silence” for a moment to reflect… 🙂 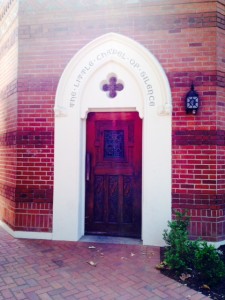 The Little Chapel of Silence at USC 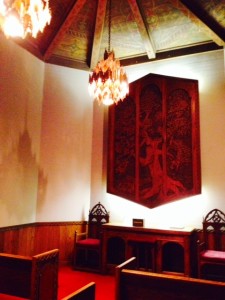 After taking a breather, I entered the LA Times Festival of Books’ “green room” where the festival organizers treated the panelists and moderators with a huge feast. Thank you, LA TIMES FOB! 🙂 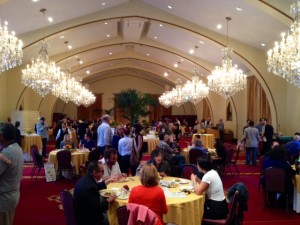 Thank you to the LA Times Festival of Books for feeding all us hungry authors! 🙂 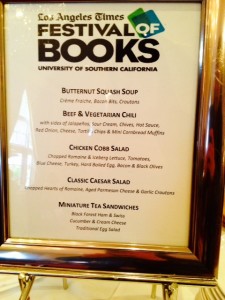 Here’s a sample of what the authors got to eat at the LA Times Festival of Books green room. Thank you! Yum! 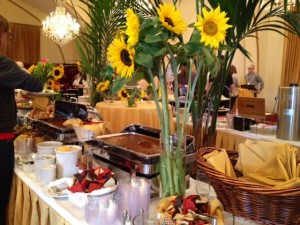 I ate EVERYTHING at the LA Times Festival of Books green room. Thank you LATFOB! 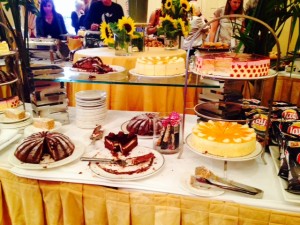 I made sure I left room for the dessert table at the LA Times Festival of Books green room banquet! 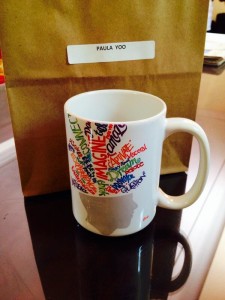 We all got swag! Check out my awesome LA Times Festival of Books coffee mug!

After gorging ourselves on tons of food (thank you LATFOB!), we headed for the YA Stage/Signing Area for our panel… 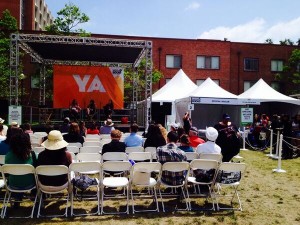 This is the YA Stage/Signing Area for all the YA-themed panels at this year’s LA Times Festival of Books! 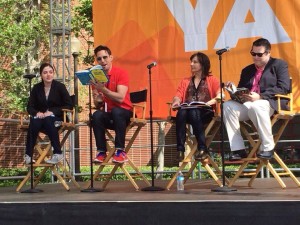 And of course, let’s not forget our moderator. ME! AKA “P.Yoo.” LOL! 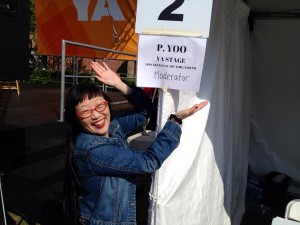 After our panel ended, I met up with some friends and checked out all the amazing booths at the festival. Including, of course, the $5 bookstore! 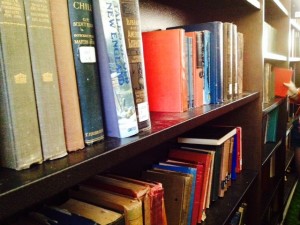 Who can resist the $5 bookstore booth at the LA Times Festival of Books? 🙂 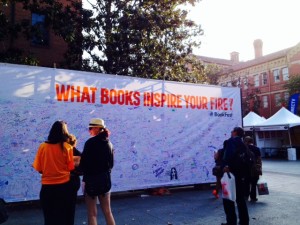 Festival goers wrote down their favorite books that inspired them. I hope someone included my GOOD ENOUGH! 🙂 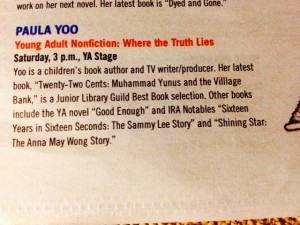 I was so excited to be included in the LA Times Festival of Books edition! 🙂

I hope you enjoyed our behind-the-scenes peek of today’s LA Times Festival of Books panel on “YA Non-Fiction: Where the Truth Lies.” Thank you again to The Los Angeles Times and the Festival of Books for hosting such an amazing event every year. It’s so wonderful to see how many hundreds of thousands of people still read BOOKS with great passion and love.

Until my next blog, HAPPY WRITING! Always remember… WRITE LIKE YOU MEAN IT! 🙂