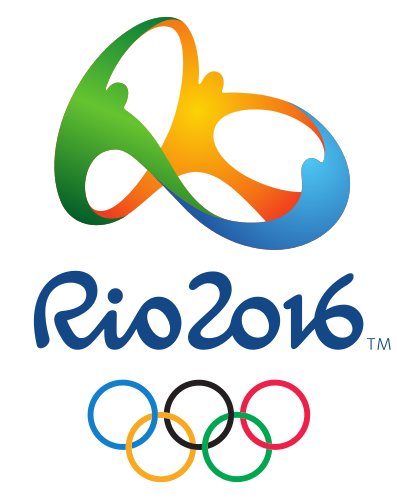 The opening ceremony for the 2016 Summer Olympics in Rio is tonight! I always look forward to the Olympics (both winter & summer) because my first published children’s picture book was about Olympic champion diver Dr. Sammy Lee, a Korean American who broke racial barriers with his back to back Gold Medals in the 1948 and 1952 Summer Olympics.

Dr. Lee won two Gold Medals and one Bronze Medal in diving at the 1948 and 1952 Olympics. But as a boy growing up in California, he was not allowed to swim in his town’s public swimming pool because of the color of his skin. Dr. Lee not only overcame that racial discrimination by winning two Gold Medals at the Olympics, but he achieved his father’s dream of becoming a doctor as well. His hard work ethic, persistence, and dignity against discrimination have made him an iconic role model for the Asian American community. Dr. Lee was the subject of my first children’s picture book, SIXTEEN YEARS IN SIXTEEN SECONDS: THE SAMMY LEE STORY (Lee & Low Books 2005, illustrated by Dom Lee). 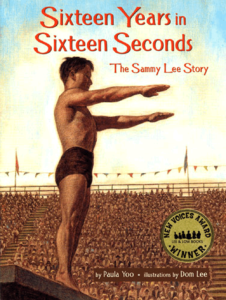 To celebrate this year’s Olympics, here’s a look back at Dr. Sammy Lee when I first met him in 2004 when I was researching my book. 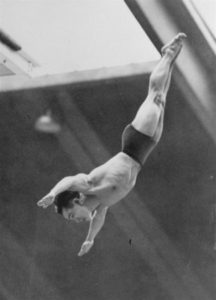 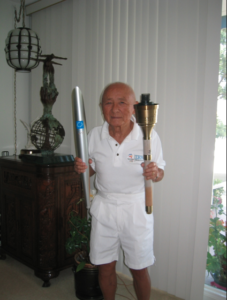 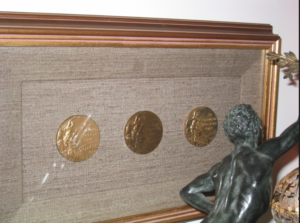 Here is the first page of my book, SIXTEEN YEARS IN SIXTEEN SECONDS: THE SAMMY LEE STORY (illustrated by Dom Lee, Lee & Low Books 2005). As a child, he was forbidden from swimming in his town’s local pool because he was not white. Children of color were only allowed to swim in this pool on Wednesdays. The town would drain the pool afterwards. 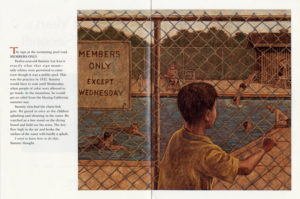 And here is Dr. Lee in 2004 looking into that SAME POOL from 1932… thanks to his Olympic achievements and raising awareness about racism, he is now always welcome here – as are ALL children, no matter what the color of their skin. 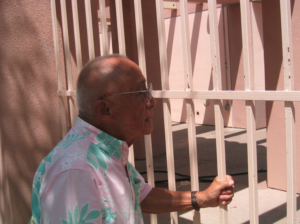 Dr. Lee in 2004 looking into the same pool he was forbidden from swimming in back in 1932. Today, he is their honored guest and always welcome, thanks to his activism against racism.

It was an honor to meet Dr. Lee. Here’s a photo of Dr. Lee, illustrator Dom Lee, and I from our research interview back in 2004: 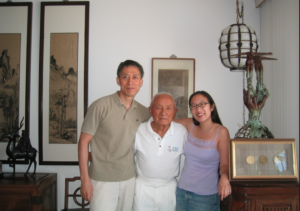 In November 2013, the “Dr. Sammy Lee Medical and Health Science Magnet Elementary School” was established in Los Angeles, CA. The school was created to promote a focus on medical and health science for elementary school students and to honor Dr. Lee’s commitment to overcoming discrimination and never giving up on your dreams. 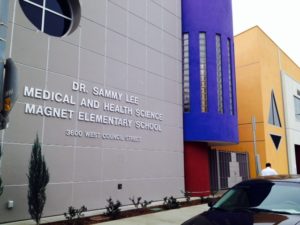 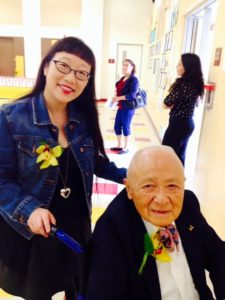 November 2013 – I was invited to attend the opening of the Dr. Sammy Lee Medical & Health Science Magnet Elementary School in 2013 with Dr. Lee!

You can check out more information about this school from my blog about its opening ceremony here: https://paulayoo.com/dr-sammy-lee-medical-health-science-magnet-elementary-school-opens/

For more information on my book, go here: https://paulayoo.com/portfolio/sixteen-years/ and https://www.leeandlow.com/books/2451

For more information on our amazing illustrator for the book, DOM LEE, go here: http://www.domandk.com

Now it’s time to turn on the TV and watch the 2016 Summer Olympics! Good luck to everyone! 🙂