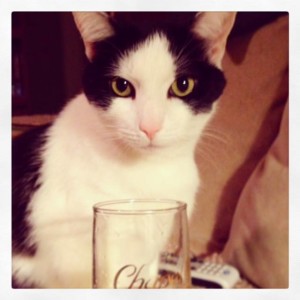 In the spring of 2008, an abandoned black and white cat who had been living on the streets for several months started to hang out by the screen door that led to my study. His paws were filthy, he had worms and other disease problems, and he was tired and scared and hungry. He stayed by my window for a month, and I fed him tuna. He showed up at my door every morning at EXACTLY 10 AM.

Then on April 15, 2008, this stray cat failed to show up for his regularly appointed tuna time. I waited an hour. And then another hour. And then I started crying. I was scared he may have gotten hurt. I walked for two miles around our building to find him. When I returned home, he was waiting for me! He was just late!

I realized I was in love with this extremely friendly and sweet-natured cat. So I immediately took him to a vet to get him de-wormed and microchipped. I don’t know his real birthday, and the vet estimated at the time that he was two or three years old. So April 15th is Oreo’s unofficial birthday and official adoption day birthday! Happy Birthday Oreo! Happy “Gotcha” Day!

Oreo now has his own Twitter page (he has over 1,300 followers!) and Youtube’s “Warm & Fuzzy” eHow Pets Channel did a story on us last year. You can watch it here: https://www.youtube.com/watch?v=eHpvlG-9PAg

(Keep reading after the break for more adorable details and pictures… You know you want to…! LOL!)

Here are some pictures showing Oreo’s timeline since his “Gotcha! Day” on April 15, 2008. Since I adopted him, I have also adopted two more black and white cats – Beethoven and Charlotte. My three cats are inseparable. I am a very lucky human being. I would say my cats adopted ME. 🙂

Recently, Oreo developed feline asthma and is on a diet because I spoiled him with too many tuna treats. (He weighs about 18 pounds!) I’m monitoring his weight and health and so far, he has been slowly losing weight and his feline asthma is thankfully under control. He still follows me everywhere and wakes me up at least a few times every night demanding more tuna or cuddles. 🙂

Here’s what Oreo looked like when he first starting hanging around our home in 2008…  He had worms, fleas, the works. But yet he was so curious and friendly and gentle and stole my heart immediately!

Oreo was not happy when I took him to the vet to make him feel better after having been abandoned (or lost?) for a long time. Despite his big size, he is one big crybaby whenever we take him to our awesome vet. 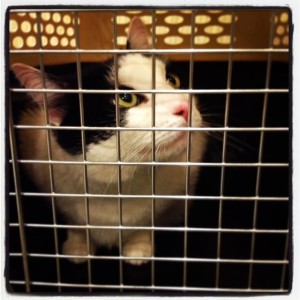 When I first adopted Oreo, he loved to sit with me and watch TV! 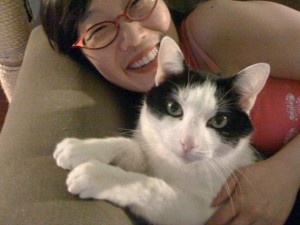 Me & Oreo watching TV together!

Oreo also likes to take TONS of selfies on my iPhone. He’s very narcissistic. But you can’t blame him – he is so handsome! 🙂 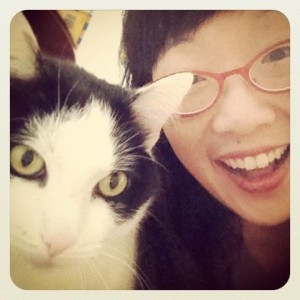 Oreo is obsessed with taking selfies of us! 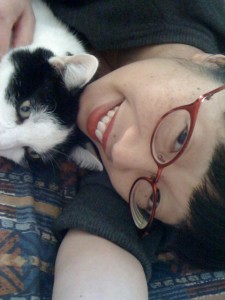 Oreo is so narcissistic with his obsession with taking selfies of us! 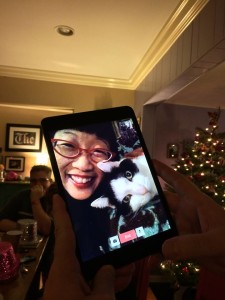 Oreo noticed I liked to sit and write a lot on my computer and in notebooks. He was curious about my writing and wanted me to read what I wrote out loud to him… 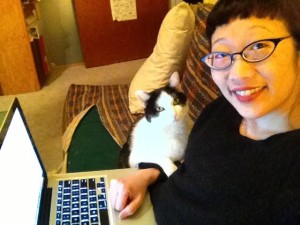 Oreo never leaves my side while I write because he wants to hear how the story ends!

But Oreo is a very honest cat. He always told me EXACTLY what he thought of my writing. Sometimes his criticisms were hard to take… 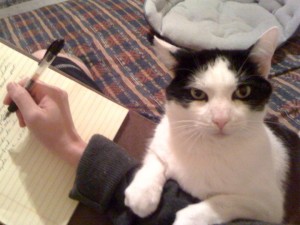 Oreo is NOT happy with how this story of mine ended… 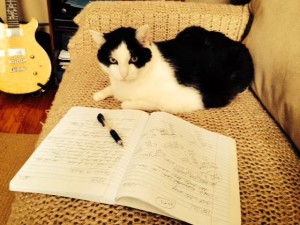 Oreo is very harsh with his criticism of my writing. Everyone’s a critic! Sheesh!

Finally, Oreo couldn’t take it anymore and had to revise what I wrote. With a little help, of course… 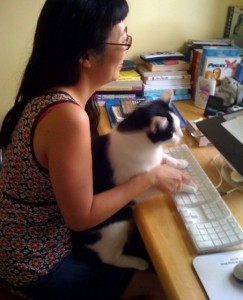 Confession: I admit it. Everything I’ve ever written was really written by Oreo. He is my Cyrano! 🙂

Oreo is also very patient with me when I dress him and Beethoven and Charlotte up for special holidays. Like Christmas… 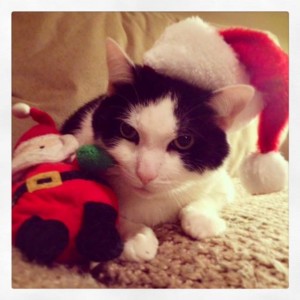 Merry Christmas, Oreo! I think he is saying “Bah Humbug!” to me. 🙂 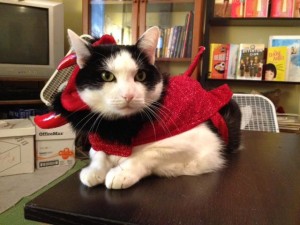 Oreo is one lucky devil!

Despite the fact that Oreo is now a Big Boy Cat and no longer a baby kitten, he still loves playing with laser lights and shopping bags… 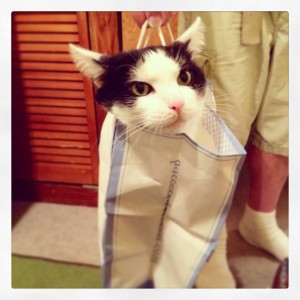 The Cat’s in the Bag!

But Oreo took his responsibility as Big Brother to our new cats very seriously when we adopted Beethoven and Charlotte on August 1, 2010… 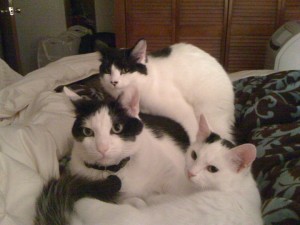 Oreo makes sure new siblings Beethoven and Charlotte are snug and warm before bed! 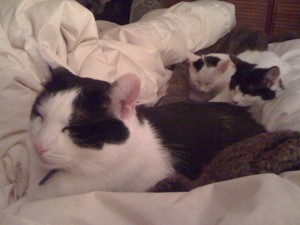 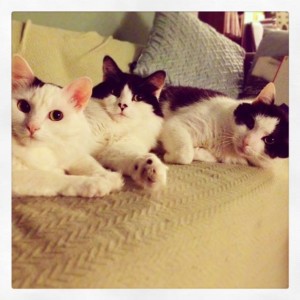 As you can tell, Oreo has changed my life forever. He’s also made me a better writer! Happy “Gotcha” Birthday to Oreo! You can follow him on Twitter here: @oreothecatyoo

Until the next blog, please remember to spay/neuter your pets! And as always, HAPPY WRITING! WRITE LIKE YOU MEAN IT! 🙂