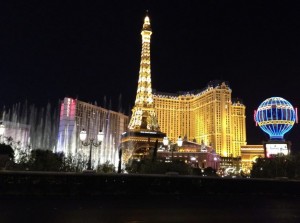 Happy Holidays! This is just a fun blog to share some of my adventures on our annual Xmas in Vegas vacation as well as some end-of-the-year news updates. We’ve been celebrating Christmas in Las Vegas every year since 1999. And yes, believe it or not, some of my best writing gets done while in Vegas. So it’s also a good luck writing tradition for me as well.

Every year since 1999, we’ve been celebrating Xmas in Vegas. It’s my favorite tradition! I’m a huge foodie, so I love visiting all the famous restaurants and sampling gourmet eats at happy hour prices. I’m also addicted to the nickel poker slots, so I like to get my game on in Vegas.

BUT… I’m very smart about nickel poker. I never bet my winnings, I know all the “right hands” to choose, and I prefer the single Jacks or Better slots that are unfortunately disappearing off the Strip. Here’s a picture of a typical nickel poker slots night where I won a profit of over five bucks. 🙂 LOL! 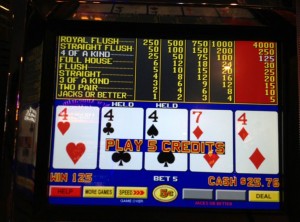 A typical winning night for me at the poker nickel slots. Hey Big Spender! 🙂

Every year, the foodie in me loves to try new Vegas famous eats. This year, we went off Strip to test out two famous Vegas eateries – The Golden Steer and Lotus of Siam.

The Golden Steer has been around since 1958. It’s a famous Las Vegas icon where the Rat Pack used to hang out, along with Marilyn Monroe, Betty Grable, and John Wayne among other Hollywood elite of the golden years. They are famous for their table-side Caesar’s Salad and their steaks, of course. Here are some fun pics from our Christmas Eve dinner there…

Here’s the famous signage of the restaurant… 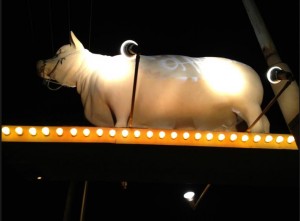 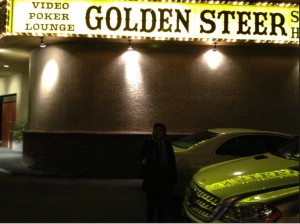 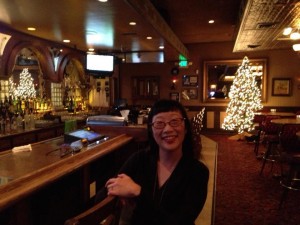 Waiting for our table at The Golden Steer!

Here’s where the Rat Pack used to sit… they sat us, however, at John Wayne’s table, which was still really neat! 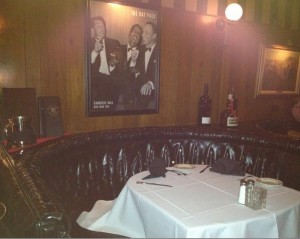 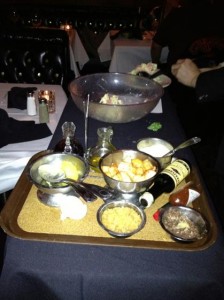 We are watching our waiter prepare our Caesar salad table-side…

It was a delicious salad! 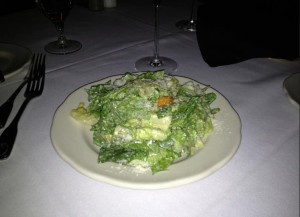 This salad was worth the wait!

For our Christmas Eve dinner, we had the Caesar salad, prime rib, the sirloin, and the creamed corn. We were too full to order the table-side Bananas Foster dessert. NEXT year! 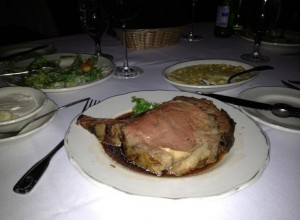 We also enjoyed many bargain-priced gourmet Top Chef-type eats at various happy hours on the Strip, starting at one of our favorite restaurants, Emeril’s Fish House at MGM pictured below. Other happy hours included the best oysters on the half shell at PJ Clarke’s in Caesar’s Palace, an amazing Italian goat cheese spicy fondue at D’Vino’s in Monte Carlo, and many more places! 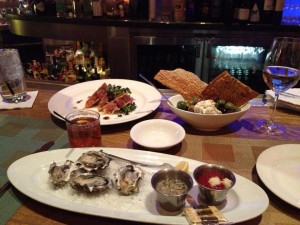 One of our favorite happy hours is at The Stratosphere’s 107 lounge which is on the 107th floor. You can watch the bungee jumpers fly past you as you dig into some very affordable drink & small plate specials. Here’s our view from The Stratosphere… 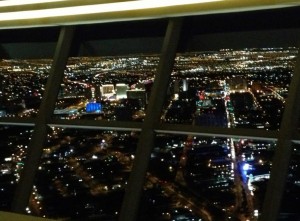 Our view from the Strastosphere Tower… wow! It’s also amazing to see the bungee jumpers fly past the windows, too!

Although I’m a foodie, I am NOT a foodie snob. I always have to visit the famous Fremont Street Experience in downtown Las Vegas for their infamous deep fried Twinkie. We also sampled the new “D” casino’s American Coney Island joint because the owner is from Detroit and I used to write for The Detroit News. I love both Lafayette and American Coney Islands. We loved our Coney Island at The D. And then, we went for our dessert… 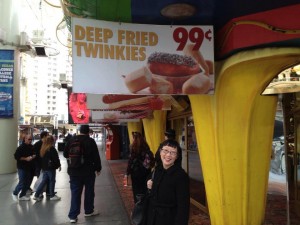 Oh Deep Fried Twinkie… oh yessss, you will be miiiiine, my preciousssss…

Here’s a close up of this deep fried Twinkie… 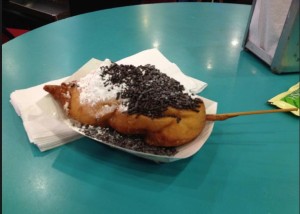 Close up of the Deep Fried Twinkie… look quick before it disappears!

And photographic evidence of me about to consume my preciousssss… 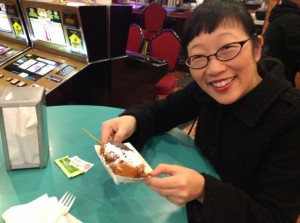 OF COURSE I ate the whole thing! 🙂

But we didn’t just play poker slots, gobble down good eats, and enjoy the touristy Strip. We also got some education on this trip! We attended the Titanic exhibit at the Luxor because I am a huge Titanic fanatic. I’ve seen all the different movies including of course the James Cameron film. (I think I’ve seen the Cameron version at least 8,294 times LOL). The exhibit was amazing. They actually recreated parts of the ship, including the famous clock area where Jack and Kate met in the movie (okay, I know Titanic is a REAL story, too!). And they gave us a passport of a passenger whose fate we later learned. Mine, Miss Mary Davis, thankfully survived. It was a very respectful, informational, and surprisingly moving memorial exhibit featuring actual items from the Titanic as well as a huge piece of the ship itself. 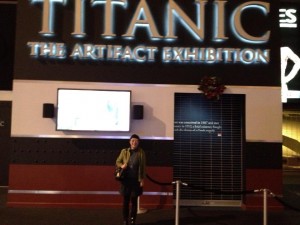 This was an amazing exhibit. Even better than the movie! 🙂

And the EUREKA/SyFy writer and sci fi geek in me was SUPER psyched to visit the Smithsonian National Atomic Testing Museum which also featured an AREA 51 exhibit. 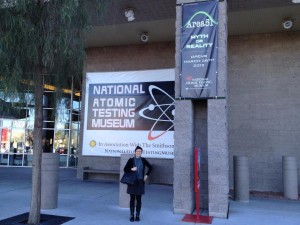 About to get my Eureka geek on at this awesome museum!

The museum featured a lot of really informative displays about the history of the atomic bomb and nuclear energy, along with special movies and videos. Here’s a picture of a bomb shelter replica featuring copies of the JC Penney mannequins that were used at the testing site. 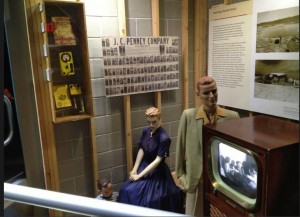 A typical exhibit at the Atomic Testing Museum!

The AREA 51 exhibit was a lot of fun. They had some Men in Black “interview” us before we entered, and we were given alien passes to be on site. 🙂 The exhibit had a ton of information on all the now de-classified Black Projects that were tested at Area 51, from the OxCart to a bunch of different stealth fighter jets. It was interesting to see which Black Projects failed and which ones are still operational in today’s military. The exhibit also examined the conspiracy alien theories with interesting video films and artifacts of debunked UFOs. The EUREKA writer and sci fi fan in me was very pleased with this exhibit! 🙂

Finally, I just had to push the big red button. I blame Fargo. 🙂 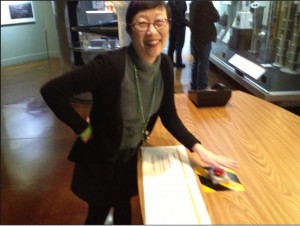 EUREKA’s Fargo was a bad influence on me… I just HAD to press the red button!

After visiting the museum, we had a nice lunch at the famous LOTUS OF SIAM restaurant that has been featured a lot on Food Network, Cooking Channel, Top Chef and other foodie TV shows. This James Beard award-winning restaurant has been called the best Thai restaurant in America. It’s tucked away in an unassuming strip mall. 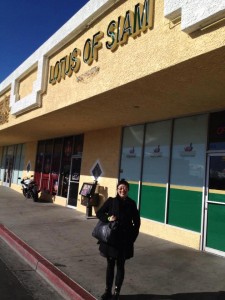 Can’t wait to eat at the famous Lotus of Siam!

We ordered the much hyped Nam Prik Ong (I saw Ming Tsai rave about it on The Best Thing I Ever Ate) and the Tom Kah Kai soup featured on a recent Top Chef episode, and we tried a roast duck with mint chili leaves. You can order the food from a spicy scale of 1 to 10. We opted for 8. Oooooh boy was that hot! But so worth it. Here are the pics: 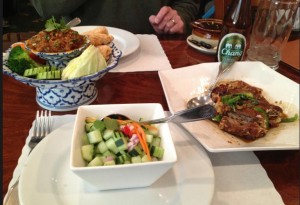 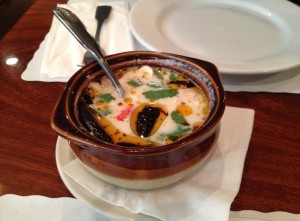 We then spent our last days in Vegas just enjoying the sights, including the famous Christmas display at one of my favorite places, the Bellagio… 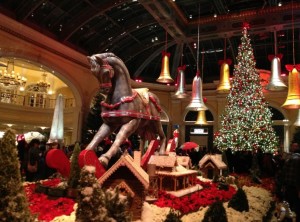 The beautiful holiday display at the Bellagio!

Finally, of course I can’t write a blog without mentioning my cats! We had our wonderful catsitter & vet tech Ginger and fellow catsitter Matt take care of Oreo, Beethoven and Charlotte while we were away. They texted us daily pictures and reports of how the cats were doing.

About halfway through our vacation, Ginger reported that the cats were leaving cryptic messages with their favorite toy – a Santa doll that they play with every day of the year. They started leaving the Santa doll in the food dishes. Hmmm. What does that mean? 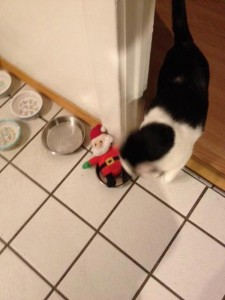 Why is Santa in the food dish? What does this cryptic message mean?

Presenting our 2012 Christmas Cats (L-R) Beethoven, Oreo & Charlotte! They’re still mad at us for this!

Nonetheless, our catsitter posted this pic of our cats patiently awaiting our return home… 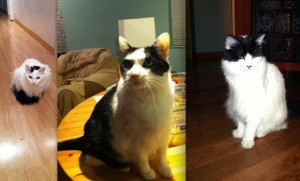 But now that we are finally back home, we can’t seem to unpack our suitcases yet. I wonder why? 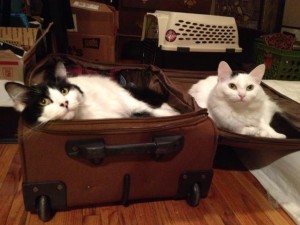 In the meantime, know I haven’t been blogging on a regular basis lately, but that’s because I’ve been busy with a lot of writing over the past year, plus a lot of music gigs. Once again, I’m working on another TV pilot spec script, a new feature film spec script, plus bits and pieces of a few novel and picture book projects. 2012 has been The Year of Writing for me! 🙂 I promise you will find out much more about these projects in 2013. So stay tuned!

Music wise, I was busy this past month with some fun gigs, including the musical A CHRISTMAS CAROL at Servite High School with the awesome Credo Arts and a Madrigal Feast performance with the talented Mater Dei High School singers at Chapman University. We played some beautiful music that really put me in a cheerful holiday mood!

On one sad note, however, I was devastated by the tragedy at Sandy Hook in my home state of Connecticut. During the week of that tragedy, we coincidentally were performing Faure’s Requiem at the Madrigal Feast, which is considered one of the most uplifting of the classical masses for the dead with its exquisite melodies and hopeful lyrics of paradise and light in the final moments of the piece. Our conductor dedicated this requiem to the families in Newtown. I love how powerful music can be when it comes to healing broken hearts.

The writing year has ended, thankfully, on a happy note. Earlier this month, I was excited and honored to be selected as one of the five honorees of the first annual Writers Guild of America (WGA)’s Feature Access Program. This program was created to promote minority screenwriters, based on The Hollywood Writers Report statistic that the number of movies written by minority screenwriters DECREASED from 6% to 5%. And those percentages are NOT good to begin with! 🙁

My script, POPULAR SCIENCE, is about an ambitious teen science geek who secretly uses a popular girl as her test subject for a prestigious national high school science competition, setting into motion a Frankenstein-like disaster when she fails to compute their growing friendship into the equation. It was chosen by blind submission as one of the top five scripts. I was very honored by this selection.

As a result, we’ve received some media attention, including articles in Deadline Hollywood, Daily Variety and the Hollywood Reporter, as well as a Google Plus Etopia video conference interview. (Click on the highlighted words to go directly to those links.) We also will be paired up with a feature writer mentor for advice, which I’m very excited about. I’m very grateful to the WGA for this wonderful opportunity and for their continued efforts to promote diversity in Hollywood.

Well, now that my Xmas in Vegas trip is over, it’s time to enter the Writing Batcave again. I will update everyone with more writing news in the new year plus more fun stuff about food, my cats, Hollywood, and books.

I wish everyone a peaceful and happy holiday season. Best wishes for the New Year. And as always, remember… HAPPY WRITING! WRITE LIKE YOU MEAN IT! 🙂