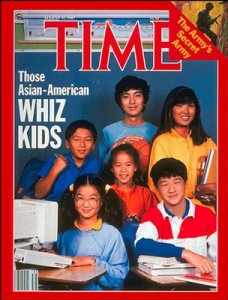 Infamous 1980s TIME Magazine cover that horrified me when I was in high school...

Welcome to my first MULTICULTURAL MONDAY blog! I saw a recent article over the weekend that had me seeing red, hence my decision to hop on my multicultural soapbox…

Once again, my YA novel GOOD ENOUGH (HarperCollins 2008) has been proven as being WAY ahead of its time. My novel came out in 2008, long before the phrase “TIGER MOM” became a household word. And now this – a recent news article that states Asian American students are choosing NOT to reveal their ethnicity on college applications out of fear of discrimination.

The link to that story is here: http://news.yahoo.com/asians-college-strategy-dont-check-asian-174442977.html

I’m depressed that even in 2011, we are STILL experiencing this sort of ridiculous racial discrimination. The whole point of my novel GOOD ENOUGH was to poke fun at the Asian American “Model Minority Myth” … but also to use humor as a way of examining the more serious issues of discrimination. (Pictured above is an infamous TIME Magazine cover story on “Those Asian American Whiz Kids” that horrified me as a teenager back in the mid ’80s. 🙁 😛 Gah!)

(If you’re curious to read more about my multicultural soapbox rant, please hit the MORE link and keep reading after the jump!)

In the December 3, 2011 AP news article, “SOME ASIANS’ COLLEGE STRATEGY: DON’T CHECK ‘ASIAN,'” journalist Jesse Washington writes: “For years, many Asian-Americans have been convinced that it’s harder for them to gain admission to the nation’s top colleges.

“Studies show that Asian-Americans meet these colleges’ admissions standards far out of proportion to their 6 percent representation in the U.S. population, and that they often need test scores hundreds of points higher than applicants from other ethnic groups to have an equal chance of admission. Critics say these numbers, along with the fact that some top colleges with race-blind admissions have double the Asian percentage of Ivy League schools, prove the existence of discrimination.

“The way it works, the critics believe, is that Asian-Americans are evaluated not as individuals, but against the thousands of other ultra-achieving Asians who are stereotyped as boring academic robots.

“Now, an unknown number of students are responding to this concern by declining to identify themselves as Asian on their applications.

“For those with only one Asian parent, whose names don’t give away their heritage, that decision can be relatively easy. Harder are the questions that it raises: What’s behind the admissions difficulties? What, exactly, is an Asian-American — and is being one a choice?”

There is NO way all Asian American students should be lumped together under one umbrella. Sure, there are multicultural issues that unite all Asian Americans, especially issues of racism, but in the end, the incredible and wonderful diversity of Asian America alone should discourage college admissions officers from lumping all the Guptas, Yoos, Lees, Nakagawas, Nguyens, etc. together as a racial monolith. It’s discrimination, plain and simple.

There are people who insist that the “Model Minority Myth” is at least a “positive” stereotype. Better to be racially typecast as a smart, overachieving Ivy League-bound nerd than someone who is lazy or criminally violent, right?

WRONG. All stereotypes are negative. The Asian “Model Minority Myth” creates a faceless monolith that trivializes individual achievement. It also erases one’s humanity. And we know what happens when an entire race of people is devalued to nothing more than an unfair and inaccurate stereotype. The results are NOT good.

(FULL DISCLOSURE: Although yes, I play the violin well and took AP BC Calculus in high school, LOL, I do not ultimately believe my academic and musical “smarts” are the result of being Asian American. Yes, my family is of Korean heritage and culturally value education, but ultimately… I was a high school sci fi geek outcast who didn’t fit in with the popular cliques and was made fun of a lot in high school. My escape? Reading books and listening and playing music. I found comfort and solace in my violin and in reading great works of literature for my English classes. That’s what motivated my strong grades and musical talent. NOT my race. So my whole point about the “Model Minority Myth” is that a stranger could see me walking down the street and assume I was smart based on my race, and not based on my individual HUMAN experience and how that shaped me much more than the color of my skin.)

Moving on to young adult literature, there were recent statistics posted from the Cooperative Children’s Book Center in Madison comparing the U.S. Census Bureau figures versus race in children’s literature. Let’s take a look at these figures…

From the U.S. Census Bureau: (census figures by race/ethnicity for the 2008 U.S. population)

Hispanic: 15 percent (I use the term Latino but I’m quoting the U.S. Census which uses Hispanic instead)

From the Cooperative Children’s Book Center on the content of 3000 trade children’s books published in 2009 with themes and topics focusing on or protagonists of the following races:

Figures from the same source regarding the races of children’s book creators:

And U.S. Census figures from 2008 showed that 43 percent of the youth population (people under the age of 20) in 2008 were from minority populations and projected those numbers will continue to grow.

The statistics are sobering. I was SHOCKED to learn that I am one of only 2.2 percent of Asian American children’s book authors published in the industry. I was also shocked that in 2009, there were only 80 books published regarding Asian American issues.

I do think there is a link between these two stories – 1) Asian American students refusing to reveal their race out of fear of discrimination in the college application process and 2) the giant disparity between the minority population and the authors and characters/issues portrayed in children’s literature. As writers, we have the privilege of not only telling fun and meaningful stories with engaging characters who have universal appeal to all readers, but we also have the opportunity to show more minority characters in universal situations that do not specifically involve race. By helping young children realize that everyone shares a universal life experience, we can help these children become enlightened adults who do not discriminate or stereotype an entire culture or group of races under one meaningless and unfair umbrella.

It starts here and now. Although I do believe things have improved greatly since I was a teenager in terms of racial discrimination, I still think we have a long way to go. Articles like this one about Asian American students refusing to reveal their race on college applications out of fear of discrimination should not be happening today. We have come a long way in terms of race relations, but we still have a long way to go. And that, in my book, is NOT good enough.

And on a lighter note… stay tuned for tomorrow’s TV TUESDAY blog featuring sneak peek photos and videos of the EUREKA special animated holiday episode, “DO YOU SEE WHAT I SEE?” which airs Tuesday Dec. 6, 2011 at 8 PM EST on SyFy! Until then, remember… HAPPY WRITING! WRITE LIKE YOU MEAN IT! 🙂