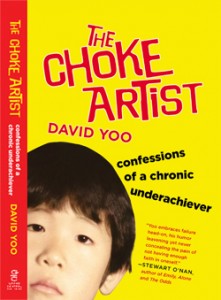 I’m proud to announce the latest book debut of my brother DAVID YOO! My brother is an acclaimed YA and middle grade novelist. His books include GIRLS FOR BREAKFAST (Delacorte ’05), an NYPL Books For the Teen Age selection and a Reading Rants Top Ten Books for Teens choice; STOP ME IF YOU’VE HEARD THIS ONE BEFORE (Hyperion ’09), a Chicago Best of the Best selection; and THE DETENTION CLUB (re-released in paperback this June 26, 2012 from Balzer & Bray!)

And now he’s debuting his first adult book! It’s a collection of hilarious yet poignant coming of age essays called THE CHOKE ARTIST: CONFESSIONS OF A CHRONIC UNDERACHIEVER (Grand Central Publishing 2012). The book debuted this month.

You can find out more about my brother at his website here: http://www.daveyoo.com/author/

(For more info, please keep reading after the jump!) 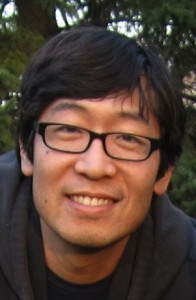 Here’s what people are saying about David Yoo’s latest book, THE CHOKE ARTIST: CONFESSIONS OF A CHRONIC UNDERACHIEVER:

“David Yoo’s essays in The Choke Artist detail the hilarious agony of being a chronic underachiever.” (Vanity Fair)

“The Choke Artist is brilliantly sneaky. David Yoo is so funny that sometimes you forget he’s writing about his (and America’s) deepest, most basic fears. In a country that worships success, failure is taboo. Yoo embraces it head-on, his humor leavening yet never concealing the pain of not having enough faith in oneself.” (Stewart O’Nan, author of The Odds and Emily, Alone)

“I loved this book and couldn’t put it down! It’s raw, startling, laugh-out-loud funny—and ultimately about the irrepressible human spirit.” (Amy Chua, Yale Law Professor and author of Battle Hymn of the Tiger Mother)

“Reading The Choke Artist is like watching someone get kicked in the nuts—in a good way. Yoo makes us laugh and wince and relive the horrific, hilarious agony of being young.” (Annie Choi, author of Happy Birthday or Whatever)

“An admitted rug-humping, shrimpy, underachieving choke artist, David Yoo confesses his deepest darkest, hilariously unattractive and sadly relatable truths. And in turn, sets us all free.” (Hilary Winston, author of My Boyfriend Wrote a Book About Me and writer for Community and Happy Endings)

“Yoo, author of two successful young-adult novels, now proves himself adept, as well, at the autobiographical essay, as this collection of 10 such pieces amply demonstrates. Set mainly during his college years at Skidmore and the 20 years that follow, the essays offer a self-image as a diffident, self-deprecating, well, choke artist, who is positively gifted at snatching defeat from the jaws of victory. Yoo is what he wryly calls “that rarity, the underachieving Asian-American” (he’s Korean). This manifests itself in various ways: getting bad grades in school, choosing to lose at tennis while appearing to be trying to win, being the last to learn the truth about his preternaturally cheerful college roommate, etc. The book takes on a poignant air when he writes about his failed relationship with his father and concludes with the most interesting essay in the book, about the frustrations of trying to become a writer while working-almost permanently-as a temp! Sometimes a bit slow, this crossover title nevertheless succeeds in its portrait of the author as a young (choke) artist.” (Booklist)

“David Yoo’s essays in The Choke Artist detail the hilarious agony of being a chronic underachiever.” (Vanity Fair)

“Yoo’s first foray into nonfiction possesses the same cringe-inducing, self-deprecating humor evident in his novels. The book’s humor belies a deeper story: that of an insecure child, conscious of his status as the only minority growing up in an all-white, upper middle-class suburb, torn between his desire to cultivate his own identity and his fear of being different.” (The Daily Beast)

For more info on my awesome brother, please visit his website here:

For more info on his books, go here:

And don’t forget, his middle grade novel THE DETENTION CLUB is also being re-released in paperback this June 26, 2012! The book cover was done by amazing children’s book author/illustrator DAN SANTAT (a familiar face on my NaPiBoWriWee blogs). 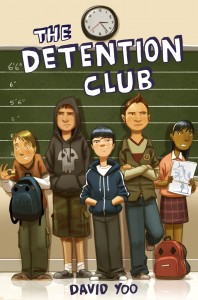 Congratulations again to my awesome brother! And as always, until the next blog, please remember… HAPPY WRITING! WRITE LIKE YOU MEAN IT! 🙂