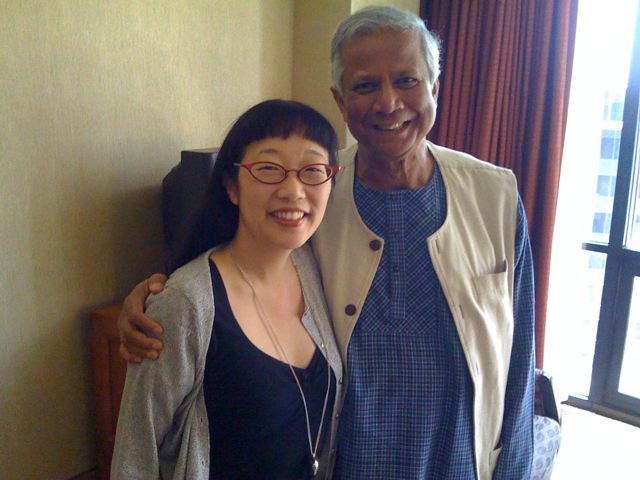 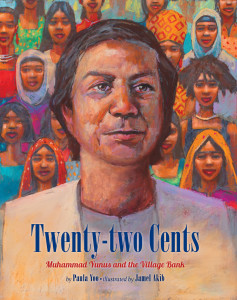 I’m excited to announce a sneak preview of my latest book (fourth one so far!) that launches this August 15, 2014. It’s my third children’s picture book biography to be published by Lee & Low Books. The book is called TWENTY CENTS: MUHAMMAD YUNUS AND THE VILLAGE BANK. It is scheduled for a Fall 2014 release. The amazing illustrator for the book is Jamel Akib.

You can find out more about my book here: https://paulayoo.com/books-yunus.html

I had the honor and privilege of interviewing 2006 Nobel Peace Prize winner Muhammad Yunus who won, along with his organization, Grameen Bank, for using the concept of “micro credit” to help eradicate poverty in Bangladesh.

The book description currently is: “Growing up in Bangladesh, Muhammad Yunus witnessed extreme poverty all around and was determined to eradicate it. In 1976, as an Economics professor, Muhammad met a young craftswoman in the village of Jobra who needed to borrow five taka (twenty-two cents) to buy materials. No bank would lend such a small amount to an uneducated woman, so she was forced to borrow from corrupt lenders who charged an unfair interest rate, and left her without enough profit to buy food. Muhammad realized that what stood in the way of her financial security was just a few cents. Inspired, Muhammad founded Grameen Bank where people could borrow small amounts of money to start a job, and then pay back the bank without exorbitant interest charges. Over the next few years, Muhammad’s compassion and determination changed the lives of millions of people by loaning the equivalent of more than ten billion US dollars in micro-credit. This has also served to advocate and empower the poor, especially women, who often have limited options. Twenty-two Cents is an inspiring story of economic innovation and a celebration of how one person—like one small loan—can make a positive difference in the lives of many.”

Microbanks aren’t new, although they are gaining prominence. Here is the story of the first—or at least the formal first—and the one that gained the most notoriety.

Muhammad Yunus grows up in the far-eastern part of India before Partition, in what is now Bangladesh. Although his father makese a decent living, Muhammad is exposed to poverty every day, from beggars at his door to the poor encampments he sees during his Boy Scout excursions. He graduates university, and each day as he walks to work, he passes a woman making stools from bamboo; she is obviously in dire financial straits. He stops to speak with her, to learn her circumstances. Yoo tells the story clearly and unflinchingly, though compassionately, explaining to readers the dreadful trap of the debt cycle. That is lesson No. 1 in this book: The debt cycle is a global plague. Yunus realizes that a simple monetary gift will not help the women out of poverty, but a tiny loan that brings her and other village women into entrepreneurship can. This is lesson No. 2 and what earns Yunus the Noble Peace Prize. Akib’s artwork is drawn in hot shades of pastel that are at once unforgiving and exhilarating.

A heart-gladdening testament to pulling your own suspenders tight, with a little help from your friends. (Picture book/biography. 6-11)

“In this illustrated take on the unusual topic of microcredit banking, Yoo and Akib bring to life the remarkable work of Muhammad Yunus and the Grameen Bank. The account begins with Yunus’ birth in Chittagong, India, in 1940, and moves chronologically through his education in Bangladesh and the U.S., the founding of the bank in 1977, and his Nobel Peace Prize in 2006. Threaded through the narrative are glimpses of the moments that sustained and inspired him: his father’s advice to “learn from the world,” the shocking poverty he saw all around him, political activism, and the potential he recognized in the determination and integrity of working women. Akib’s pastel illustrations are at once impressionistic and realistic. The rich, light-infused colors brighten this biography just as Yunus’ work brightens the lives of real women and families whose destinies have been transformed. Best suited for a middle-grade audience, this eye-opening picture book provides an affecting look at how simple ideas can change the world.”

“In detailed and inviting prose, Yoo shares the story of activist and Nobel Peace Prize winner Yunus, beginning with his childhood in the city of Chittagong (then part of India). Yoo describes Yunus’s growing awareness of the injustice of global poverty and of the power of peaceful protest to incite change. Scenes include Yunus’s presence on the steps of Capitol Hill, where he rallied for peace between Bangladesh and Pakistan, and his return to a ravaged Bangladesh following the war, where his compassion and economic knowledge lead to the development of Grameen Bank. Akib’s grainy, jewel-toned chalk pastels contrast a sense of scarcity and deprivation with one of warmth and humanity. Yoo makes the significance of Yunus’s contributions understandable, relevant, and immediate. Ages 6–11. (Aug.)”

I will post updated blogs as we get closer to the book’s publication date (August 15, 2014). You can also follow all my latest book updates and news on Twitter @paulayoo.

EDITED ON AUGUST 5, 2014: I just received my book in the mail today! Some fun photos below of its arrival… 🙂 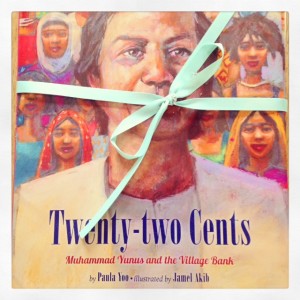 I received a copy of the hardcover plus the galleys in the mail today (8/5/14). So excited! Complete with a pretty bow! 🙂 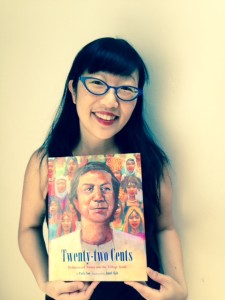 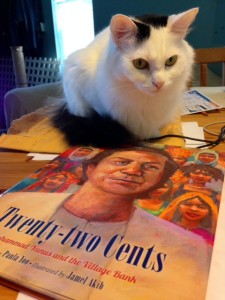 Stay tuned for more breaking book & TV & music news plus of course, more self-indulgent pictures of my cats. Until then, remember… HAPPY WRITING! WRITE LIKE YOU MEAN IT! 🙂