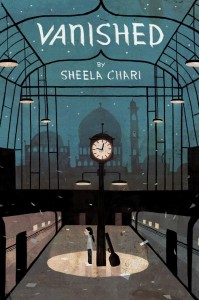 Welcome to WRITER WEDNESDAY! Today we are proud to present YA debut novelist SHEELA CHARI! Her first YA novel, “VANISHED,” was published this year by Hyperion!

Sheela Chari’s novel, VANISHED, is a fun mystery YA novel about a stolen family heirloom musical instrument. The book’s plot: “Eleven-year-old Neela dreams of being a famous musician, performing for admiring crowds on her traditional Indian stringed instrument. Her particular instrument was a gift from her grandmother—intricately carved with a mysterious-looking dragon. When this special family heirloom vanishes from a local church, strange clues surface: a tea kettle ornamented with a familiar pointy-faced dragon, a threatening note, a connection to a famous dead musician, and even a legendary curse. The clues point all the way to India, where it seems that Neela’s instrument has a long history of vanishing and reappearing. Even if Neela does track it down, will she be able to stop it from disappearing again? Sheela Chari’s debut novel is a finely tuned story of coincidence and fate, trust and deceit, music and mystery.”

CONTEST ALERT! We are featuring a signed book contest drawing with Sheela. To participate, please comment on this blog or email me at paula at paulayoo dot com to be included in our drawing. The winner will be announced November 30, 2011. Sheela will send the winner a signed copy of VANISHED! 🙂

To find out more about Sheela Chari, please visit her website here: http://sheelachari.com

And you can friend her on Facebook here: http://www.facebook.com/sheela.chari

(Keep reading after the jump for our Q&A with SHEELA CHARI!) 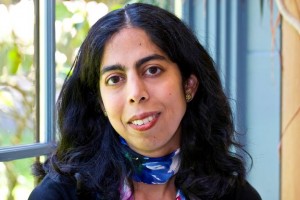 Sheela Chari was born in Bangalore, India, and has lived in Iowa, Washington State, California, Massachusetts, and New York. She loves music, mysteries, and Boston – Vanished (Disney Hyperion) is the result of fitting all of those into one book – along with a four-foot stringed instrument from India! She has an MFA in creative writing from New York University and lives in New York with her husband and two daughters. Vanished is her first novel.

— Q:  You were born in Bangalore, India. How old were you when you moved to the U.S.? Do you have any distinct memories of what it was like to move so far away? Were there any culture clashes or did you have an easy time transitioning to your new life in the States?

— A: I was three when I moved from Bangalore to Iowa. Sadly I don’t remember much, except for an early memory of me walking with my mother up to the counter of a dress shop in Bangalore to buy a purple, velvet dress. I remember being so small that my hands just barely curled over the edge of the counter as I stood up on my tiptoes to see what was going on. Was this a real memory? Sometimes our minds play tricks on us, but my mom confirms it – and I have that dress even today. Not only that, I used this memory to write my first short story in high school.  So you see? I was born to be a writer!

I can’t say I had any cultural clashes making the move to America, being as young as I was. As much as I can remember, I really thought I was like anyone else. This might have been because in school there was no one else that was like me – a young Indian-American girl growing up with different customs, language, and food in our house. It sounds strange but I think you really need to see your heritage reflected in others to get a sense of yourself.  Only after I got to college and I met people from other parts of the country and world that I realized that I was different, and that my differences were a result of my family coming from a country outside of America.

— Q: How much of Neela is Sheela? I was curious as to how much you might have drawn from your own life growing up to portray in Neela.

— A: Oh, Neela is me, and many things I wish I were! The story actually started off as a birthday gift to my niece, who shares the same name as the Neela in Vanished. For a while, Neela was based on my niece. But as the book evolved, the character strayed away from my niece’s personality and more towards what the story needed.  The Neela in the book has stage fright, which is based on my own fear of auditions. I remember auditioning for a violin part once, and one of my knees was shaking so bad I had to lean on one foot so my whole body wouldn’t shake, too! I also had dreams of being a musician (though I mainly wanted to do composition, not performance), and that universal kinship Neela feels with other musicians is something I felt myself growing up, and feel even now. I think musicians share a very special language, something so personal, immediate and wordless, that I don’t see anywhere else. Neela is also a risk-taker, and capable of making big decisions. Me? Not so much. Though I’m getting better.

— Q: Your debut novel Vanished is also unique because it’s a mystery. What made you decide to tell Neela’s story in the structure of a mystery? Are you a mystery book fan? If so, what kind of mystery novels do you like to read (as an adult and when you were a kid)?

— A: I’m not a mystery writer, but I do think that all stories are a kind of mystery, and that as readers we read because we need to find something out, either about the plot (what happens next?) or about the character (what they’ve done, who’re they’re with, where they’re going). I did deliberately decide to write Vanished as a mystery novel, because I wanted to tell the story of an Indian-American girl who plays a beautiful instrument from India that most people may not know about. To do that, I needed to draw my readers in, and I thought that a mystery, which I loved reading as a child, was the way to go.

Recently I went to a reading by an old college teacher, Alice LaPlante (Turn of Mind). She, too, wrote a mystery– a literary whodunit featuring an aging female hand surgeon with Alzheimer’s, whose best friend is murdered, and she is the main suspect. At the reading, Alice described that she had a mother with Alzheimer’s, and when she decided to write a novel about this illness, she realized that the she needed to find a way to help readers into the story. She said the mystery part of the book was the “breadcrumbs” to lead readers into the dark woods of what was an otherwise difficult and grim topic. I thought this was a perfect analogy. The mystery in Vanished is the breadcrumbs to lead my readers into the world of another culture and musical tradition. 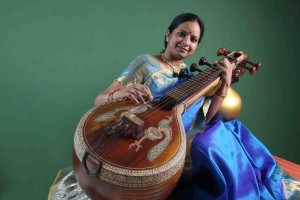 Q: Can you explain what a Veena sounds like for our readers? Do you play the Veena? I also know you studied the violin. Can you talk about your musical experiences and how they may have influenced the book? Did your own grandmother – or any other relative – play a Veena?  If you have any musicians who play the Veena or recordings that you would like to recommend for our readers, please let me know! 🙂

A: I think this is the most interesting question I’ve ever been asked – to describe a sound!

The veena is a carved, wooden instrument about four feet in length. It’s mostly hollow, with 7 strings that are plucked. The sound is lyrical and sweet – the closest Western instrument in terms of the sound might be the harp.  I don’t play the veena (I was trained as a Western classical violinist), but I’ve tried it out a few times as we have several veena students in the family – my niece, nephew, and recently, my mother. I think the main challenge is to produce a rich, continuous sound without being twangy (one of Neela’s biggest fears in Vanished when she performs on her veena at school!).

Some well-known veena players include Chittibabu, E. Gaayatri, and Jayanthi Kumaresh. In fact, Kumaresh has a wonderful web site with lots of photos, videos, and information about herself, her music, and the instrument itself.

For a short youtube video of the veena being played by Jayanthi Kumaresh, the link is here: http://www.youtube.com/watch?v=L9QFRg5y6KE

— Q: Where is the best place for you to write your books?

— A: Okay, confession time. I wish I were one of those writers with a desk, and the view of something inspirational. But I work best with my laptop while sitting on a couch, or even…my bed. I think some of my best writing is done there.  I wish this weren’t the case. Because I really want a desk overlooking a garden.  Or I want to be one of those cool writer- types who work at cafes.  But my best source of inspiration is a cozy blanket and a table lamp.

— A: If I weren’t a writer…I suspect I would be nowhere and I would be nothing. But if that weren’t the case, I might be musician. But only if a musician is allowed to write.

Thanks again to SHEELA CHARI for this wonderful interview. Everyone, please check out her amazing debut YA novel VANISHED! Also… please comment on this blog or email me at paula at paulayoo dot com to participate in our signed book contest drawing. You might win an autographed copy of VANISHED from Sheela! Winner will be announced on November 30, 2011. So stay tuned!