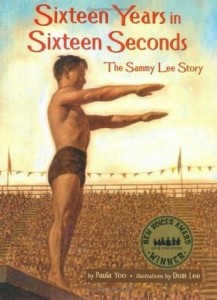 Today marks the opening ceremonies of the 2012 Summer Olympics in London! You know what that means… I will disappear into my Olympics batcave for the next two weeks! I’ve always been a HUGE Olympics fanatic (both summer & winter events). Although I’m not athletic and I don’t watch any sports, for some reason, I’m HOOKED on the Olympics. Which makes it fitting that my first children’s picture book, SIXTEEN YEARS IN SIXTEEN SECONDS: THE SAMMY LEE STORY (Lee & Low Books 2005, illustrated by Dom Lee), was about Olympic Gold Medalist diving champion Dr. Sammy Lee. (For more info on my book, go here: https://paulayoo.com/books-sixteen.html)

To celebrate the 2012 Summer Olympics, I am presenting a fun photo album of what it was like to meet Dr. Lee and write about his life for children. He is an amazing man – he’s surprisingly down to earth and funny, too! It was such a pleasure and privilege to meet him. I even got to see his Olympic medals and the torches he carried for later Olympics as well! Dr. Lee won gold medals in diving at the 1948 London Olympics and the 1952 Helsinki Olympics, becoming the first male diver to win back-to-back gold medals. He later coached diver Greg Louganis to the Silver Medal in the 1976 Olympics. 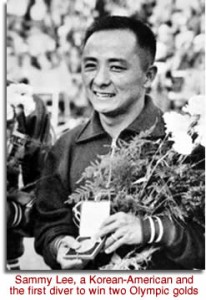 (Keep reading after the jump for more stories and photos of Dr. Sammy Lee!) 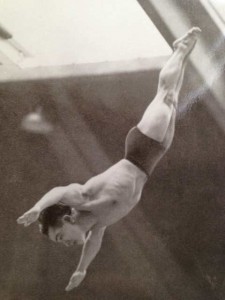 Dr. Sammy Lee – he’s diving but he looks like he’s in flight!

Below are some fun pictures of my meeting with Dr. Lee back in 2004 when we were researching the book. The book was illustrated by one of my favorite children’s book artists, DOM LEE. (His website is here: http://www.domandk.com/)

Below is a shot of the opening page of my book, with the beautiful artwork by Dom Lee. As a child, Dr. Lee was unable to use his town swimming pool except on Wednesdays because of the color of his skin. On Wednesdays, the town pool allowed all the children of color to use the pool in what they called “International Day.” It was a thinly disguised way to segregate children of color from the rest of the town. Other acts of discrimination Dr. Lee would face would include not being allowed to attend his own high school prom and being refused entry to a restaurant with his fellow diving teammates to celebrate winning a national championship. But Dr. Lee never let this prejudice stand in the way of his dream to become an Olympic champion. 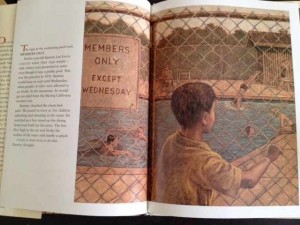 And here’s a shot I took of Dr. Lee in 2004 standing in front of the SAME SWIMMING POOL he used in his childhood… now he is an honored guest at this pool, where they consider him an American hero. 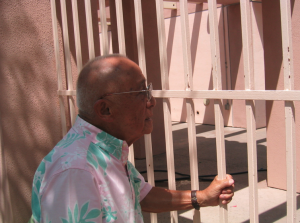 Dr. Lee stands by the same gate of his town pool. As a child, he was refused entry because of the color of his skin. Today, he is an honored guest and always welcome. 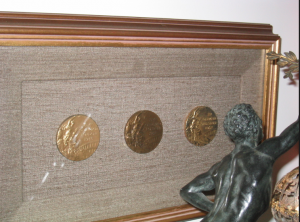 Dr. Lee was also a good sport and didn’t mind when I asked him to pose for a billion pictures. 🙂 Here he is standing proudly by his Olympic medals… 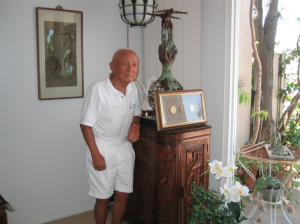 And here is Dr. Lee posing (such a good sport!) with two of the torches he ran with as a torch bearer for past Olympics. 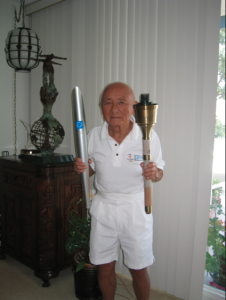 Dr. Lee holds up the Olympic torches he ran with for two Olympics! I was so envious that he got to keep them!

Finally, below is a picture of illustrator Dom Lee, Dr. Sammy Lee and I posing with his medals. Wow. What an honor to meet an American hero! 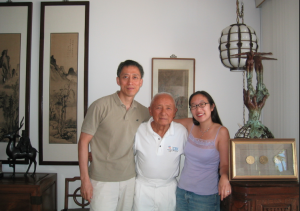 Hope you enjoyed this visit with the amazing Dr. Sammy Lee. It was an honor to meet him and to write about him.

Well, the 2012 Summer Olympics starts in a few hours. I’ll be in the Olympic Batcave for the next two weeks, watching every. single. event. 🙂 Go USA! USA! 🙂 Until my next blog, as always, please remember… Happy Writing! WRITE LIKE YOU MEAN IT! 🙂