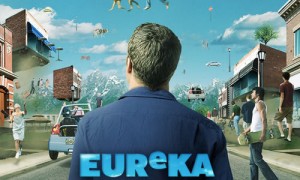 Yooreka! It’s that time again… another episode of EUREKA airs tonight on SyFy. I’m especially excited about tonight’s episode, “SMARTER CARTER,” because it was co-written by yours truly and the wonderful ED FOWLER. Our episode finally explores what happens when Carter becomes smarter than everyone else in Eureka. 🙂

In “SMARTER CARTER,” which airs Monday June 18th at 9 PM/8C on SyFy: “Dosed with a smart drug, Carter’s genius gets out of control as he starts to re-write the laws of physics, putting his friends and the whole town in danger.”

For those of you new to EUREKA, it’s a wonderful family dramedy about Sheriff Jack Carter, a regular Everyman in charge of keeping a town filled with genius scientists working on top secret government experiments safe. Which is easier than it sounds, considering how genius scientists tend to get bogged down in the details and can’t see the forest for the trees like our Sheriff Carter. Our fifth and final season has been airing all summer on Monday nights on SyFy at 9 PM/8C. Our series finale will air in July. For more info, check out our official SyFy website here: http://www.syfy.com/eureka And you can also follow our Twitter Eureka Writers feed here: http://twitter.com/#!/eurekawriters

I had the pleasure of working on this script not only with our amazing writing staff but also with fellow co-writer ED FOWLER. You can follow Ed on Twitter here: http://twitter.com/#!/edfowler Ed and I also worked together on the Lifetime series, SIDE ORDER OF LIFE. Ed is one of the nicest people in the world and a super talented writer and sci fi/music/overall pop culture geek. 🙂

Although our series is winding down, it was such an honor and privilege to work as a writer/producer on this show for Seasons 4.0, 4.5 and 5.0. I learned a lot about TV writing and production at this job, and best of all, I made some lifetime friends from our writing staff, cast and crew. I hope you enjoy tonight’s episode!